What Does Your Microbiome Have To Do With Heart Disease? 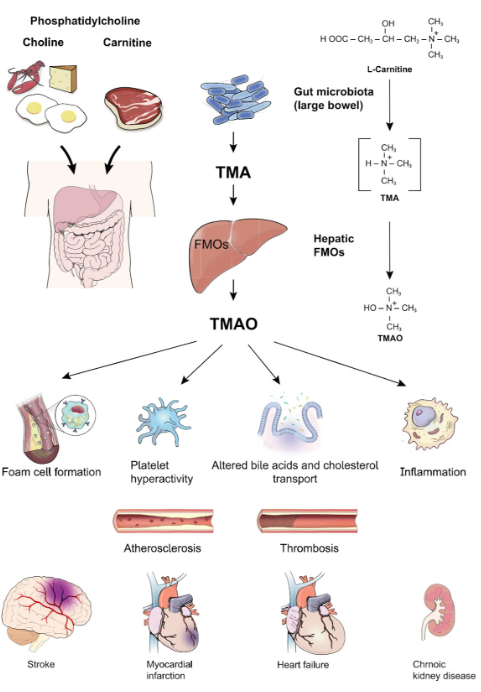 We know that our microbiome produces thousands of different compounds every single day. Some of these compounds are of benefit to our health, while others can actually contribute to disease. Specific microbes within our microbiome produce a compound called TMA when they ferment choline, lecithin, betaine and l-carnitine. This compound enters systemic circulation and then is processed by enzymes in the liver to become TMAO. Depending on whether the liver up or downregulates the conversion we may have higher or lower levels of TMAO, which is both associated with and predictive of renal, heart and metabolic disease.

TMAO has been found to not only be a predictor of cardiovascular diseases, but also directly increased the risk of death from cardiovascular diseases. TMAO has been associated with blood clots, heart attack, and stroke in over 4,000 people. Similarly, high levels of this compound were associated with increased mortality in 720 patients with heart failure. In rats, TMAO increases with age and causes oxidative stress and inflammation in blood vessels, leading to endothelial (blood vessel lining) dysfunction, which increases the risk of heart disease.

Who are these microbes? And how do they produce TMA?

These microbes must have the bacterial genes to give them the ability to make enzymes responsible for TMA production, namely choline-TMA lyase (CutC), carnitine oxygenase (CntA) and betaine reductase (GrdH).

After TMA has been made by the microbes it enters systemic circulation it goes to the liver where the enzyme flavin monooxygenase generates TMAO. Interestingly, studies have found the FMO enzyme activity is higher in females than males.The good news is that we can reduce TMAO production. But, it may not be in the way that you think.

The way to TMAO Reduction is via Ecosystem Support, not simply elimination

Choline is a nutrient that is absolutely essential for life, so we can’t just eliminate it from our diet. Nor would we want to eliminate Betaine or Carnitine, which are involved in methylation and mitochondrial health.

Moreover, in regards to choline, one study found that choline intake was not actually necessary for TMA microbes to colonize the microbiome. These microbes are capable of metabolizing other types of foods or bacterial endproducts, and sometimes mucous, all of which would attract them to our gut.

Of course Betaine, Carnitine and Choline are present in higher quantities in meat, fish and eggs - so animal based proteins. And this has led to many promoting vegetarian/vegan diets as a solution. That said, we don’t have the research to show that this actually works to decrease TMAO AND promote overall health. In fact some research demonstrates otherwise. This could be because the foods that contain betaine, carnitine and choline contain other compounds which are beneficial for health. For example, intake of fish, which is rich in anti-inflammatory Omega 3’s as well as choline has actually been shown to decrease risk of heart disease.

Why else might we see that choline, betaine and carnitine rich foods improve health despite increases in TMAO? It could also be due to the fact that depending on the status of a patient’s microbiome they may respond to a food differently than the next person. They might be managing their microbiome very well and eating other foods that reduce TMAO producing microbes.

There are also other health aspects which can increase or decrease TMAO. For example, Gastric bypass and sleep deprivation have been found to increase TMAO levels.

In general, the studies we do have pitting nutrition against TMAO are small in size, which means they often aren’t reliable.

To give you an idea of the mixed research in the area..

However, another study on 38 healthy people showed that the intake of up to three eggs per day did not increase TMAO levels, but had beneficial effects such as increasing HDL cholesterol and choline.

Dairy consumption was associated with higher TMAO levels in 271 adults.

On the contrary, in 38 overweight or obese women, increased consumption of dairy resulted in lower TMAO levels.

If you are curious about your own TMAO levels you can have serum TMAO run at Labcorp for about $100 or Boston Diagnostics for $60.

Let’s have a look at some of the nutrition and items which might lower TMAO.

In another study in mice, a single type of prebiotics increased TMAO, whereas a multiple prebiotic mixture decreased TMAO levels. In this case the prebiotics may have grown out the competition against TMA producing microbes, forcing them to become reduced. This suggests that working on your gut diversity is important for controlling TMAO levels.

Disagreements in regards to microbiome testing and TMAO

Some researchers have concluded TMA-producing status of the gut microbiota should be considered when making recommendations about choline intake requirements for humans. Particularly if they are at risk for heart or renal disease.

On the other hand, other researchers concluded fecal microbiome composition does not predict systemic TMAO because, in this case, gene copy number does not predict bacterial metabolic activity.

My thoughts? More research into this area is needed. Particularly considering the rapid improvement of microbiome testing. Right now microbiome testing IS mostly reflective of the fecal microbiota and less so of the mucosal microbiota, meaning we cannot access the big picture as far as microbial composition goes.