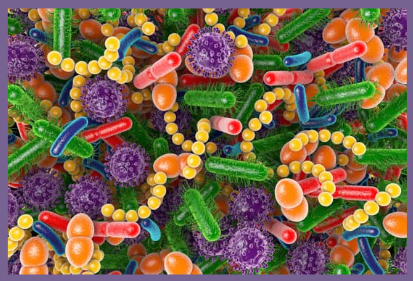 If you have SIBO you’ve probably heard of the more common contributors to SIBO, such as C. jejuni, E-coli and Methanobrevibacter. These microbes are heavy hitters for your body and immune system. But, let’s talk about some of the lesser known contributors. And some of the ones that are typically “commensal,” but can turn opportunistic under the right circumstances.

This microbe received a fair bit of press when it was discovered that athletes tend to carry more of it than non athletic people. Researchers were jumping at making a Veillonella probiotic. But, we haven’t heard much about it since then. Why? Higher levels of Veillonella are associated with oxidative stress. So could Veillonella be stepping in to mop up endproducts associated with exercise induced oxidative stress - ultimately helping athletes by reducing their burden of stress induced metabolites? It’s also associated with cardiovascular disease. There seems to be an association between Veillonella and cholesterol. But, important to us is knowing that it produces hydrogen. I once worked with a client whose gut went out of whack after doing a marathon. Perhaps, with a predisposition to lower diversity due to reliance upon supplements rather than real and diverse whole foods, the Veillonella grew out of proportion to the rest of their microbiome. And this was the start of the onset of hydrogen dominant SIBO for them.

The opportunist and hydrogen sulfide producer Desulfovibrio is special because of it’s resilience. It commonly is found in aquatic environments or water-logged soils. They can be found living in extreme environments such as hot water aquifers. Desulfovibrio can survive in oxygen rich as well as oxygen deprived environments. Some Desulfovibrio species appear to have bioremediation potential for toxic radionuclides such as uranium - if you have this type of overgrowth consider running heavy metal testing! This genus Desulfovibrio tends to be elevated in ADHD, Autism, brain trauma, Colon Cancer, depression, high blood pressure, IBS, liver cirrhosis, MS, obesity, RA, Schizophrenia and T2 Diabetes. It is appearing more-so (with recent research) that hydrogen sulfide producers become over-represented in the human gut in order to compensate for a need for sulphur and/or glutathione - or for low hydrogen sulfide elsewhere. In the case of high blood pressure for example, to try and reduce hypertension. This microbe is also special, because it doesn’t tend to consume carbohydrates. I often see it in those who have gone too strict with their carbohydrate intake, or who have been using restrictive diets for too long.

Higher Clostridium are found in Autism. In excess this genus is especially problematic due to it's ability to prevent breakdown of dopamine, which can contribute to Schizophrenia, OCD and anxiety. Look out if you have slow COMT snps on top of having overgrowth of Clostridium. Notorious within this group is the pathogen C. difficile. But, there are many more species than C. difficile, including some that are typically beneficial. There are a few ways to tell if you have Clostridium overgrowth. You can run the glucose breath test or an organic acids test.

As I mentioned there are beneficial species within this genus too. C. eutactus is protective against IBS. Clostridium catus produces beneficial short chain fatty acids.

If overgrowth of this genus is an issue you'll want to curb your sugar intake, as this genus loves glucose.

Because it produces spores, treatment of pathogenic Clostridium species should be completed for at least 12 weeks - through multiple life cycles

For those of you who would like a cheat sheet on the types of SIBO microbes and the gases they produce you can purchase one here:
https://mindmoodmicrobes.ca/product/sibo-microbiome-cheat-sheet/
We also have a self-guided program for those of you needing support with hydrogen sulfide type overgrowth. We dive deep into dietary specifics for each of the H2S microbes, as well as supplements that can hinder or support your recovery. See here
https://www.wildbiome.ca/courses
And of course, you are welcome to book a microbiome or OAT test review with us during which time we can go over your health history, testing and come up with recommendations specific to you.