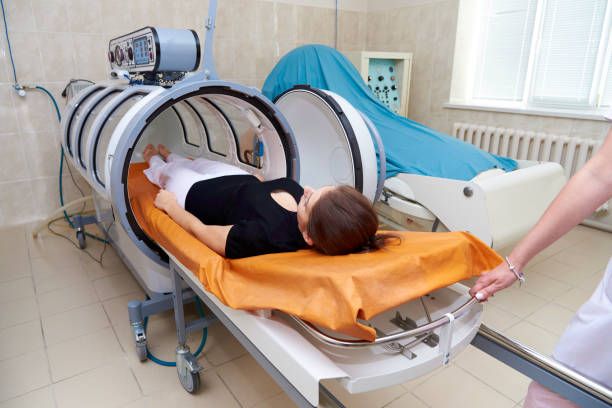 What is Hyperbaric Oxygen (HBOT)? Hyperbaric simply means more pressure. While in a hyperbaric chamber under pressure and exposed to 100% oxygen the pressure of the chamber encourages more efficient entry of Oxygen into the bloodstream. HBOT does more than just heal decompression sickness or carbon monoxide poisoning. The extra oxygen encourages the body to heal.

Our Hyperbaric Technician (Regenerative Biologist) Andrew became familiar with HBOT due to his career as a commercial diver and with his work for the Navy. But, HBOT isn’t just for divers. It can promote regeneration of blood vessels and speed up recovery time in many conditions. Oxygen is a rate limiting factor for energy production by our cells. More energy production increases our potential and productivity. HBOT increases oxygen transport to the brain, which heightens senses and synapses to facilitate superior decision-making. Most importantly, HBOT makes red blood cells more flexible, which increases their ability to penetrate blood vessels and speeds the healing process.

Studies on HBOT have proven that it decreases the production of pro-inflammatory cytokines such as TNF-alpha, reduces inflammation in humans and animals. It shares this property with other therapies commonly prescribed for the treatment of IBD, for example, immunomodulators, amino salicylates, and corticosteroids. But, by increasing anti-inflammatory properties and increasing efficiency of red blood cells, HBOT encourages the healing of wounds, both inside and out. In addition, HBOT directly kills anaerobic bacteria, encourages white blood cells to engulf bacteria and fungi, disables certain microbial toxins. HBOT even reduces biofilm to a degree. Research suggests the immune response to bacteria and fungi is a potential cause of Crohn’s disease. In general, HBOT’s application in the treatment of UC, Crohn’s, and pancolitis is highly promising.

Meta-analysis completed since 2012 find high levels of remission and improvement.

Hyperbaric Oxygen Treatment for Inflammatory Bowel Disease: A Systematic Review and Analysis, published in 2012, performed comprehensive searches through eight scientific databases for studies of HBOT on IBD. They identified 13 studies involving Crohn’s and six involving UC. Most of these studies reported improvements during and after treatment.

Only two of these 13 studies reported adverse effects, with ten reporting no negative effects and three specifying that no issues were encountered. There was one case of ear drum perforation and one case of psychological intolerance related to the increased pressure. Both issues were temporary and vanished when treatment was stopped.

A 2014 publication, Systematic Review: The Safety and Efficacy of Hyperbaric Oxygen Treatment for Inflammatory Bowel Disease, references the 2012 paper and processes significantly more information, yielding 42 studies after eliminating 271 others that lacked well-controlled, blind, and randomized trials. These final 42 studies consisted of 613 patients with either Crohn’s or UC with an average response rate of 86%. For Crohn’s the rate was 88% with 18 out of 40 patients reporting complete healing and 17 reporting partial healing. All patients reported at least some positive effects.

Overall, these publications yielded largely safe and highly positive results, with adverse effects limited to adverse responses to pressure in the inner ear and general psychological issues related to the procedure. HBOT was found to have a high potential to effectively ameliorate and heal Crohn’s, ulcerative colitis, and pancolitis.

A 2022 publication reviewing 19 eligible studies with 809 patients found rates of remission to be 87% for UC, 88% for luminal CD and 60% for perianal CD and 31% for pouch disorders and 92% for pyoderma gangrenosum. 15% of patients experienced a temporary adverse event, with ear barotrauma being themost frequently reported.

One woman with UC went through several procedures, ending with proctocolectomy with ileal pouch–anal anastomosis (IPAA) that resulted in a pain-free three years before her symptoms returned. The results of a pouchoscopy at the Cleveland Clinic showed that her J-pouch was dying and the tissue was severely inflamed from poor diet and stress causing it to receive ineffectual blood flow and oxygen, with severe pouchitis. Her doctor prescribed an antibiotic for pouchitis, Canasa (mesalamine), hydrocortisone, and improvements in diet and fitness, along with 30 two-hour sessions of HBOT five days a week for six weeks.